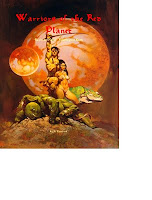 Lest you think all the Megadungeon exploration has distracted me from my forays onto Mars, work continues apace on Warriors of the Red Planet! I expect to have the "rough rough draft" complete by the end of October, which will allow me to begin ordering art, edit and proof, and lastly, finalize the layout and get the baby set for publication. Speaking of art, click on the little pic above to get a good idea of how the real cover will look. Obviously, this isn't the "real" cover (or is it?;), but will give you a good idea of the inspiration for the real thing.

For this month's preview, I'm presenting an example of what I've been calling "Weird Science". In addition to the gadgets that are the purview of the Scientist Class, WotRP will feature a selection of flashy and useful doo-dads for all character classes to use. Not only do players love fidgeting with unkown technology, but a Swords & Planets campaign has a big void to fill with no magic items. "Weird Science" takes the place of those magical swords, cloaks, and boots.

Door Atomizer
Thought to have been developed by the notorious scientist Hin Hintos for the Assassins of Golar Vay, the Door Atomizer is a small, copper-sheathed box with a square aperture in one side made of dark glass. When a button is depressed on the top of the Atomizer, the glass emits a wavy, purplish beam, roughly rectangular in size. If this beam is projected onto a wall not further than five feet away, it will disentigrate a door-sized section (6'x3') within 1d4 rounds. The irradium battery within the device will recharge itself within 24 hours, and the Atomizer will be ready to use again. The device is harmless as a weapon, as it only affects inanimate substances, and most living targets would not stand still long enough to be affected.

Crystal Targeting Scope
The Crystal Targeting Scope was common in the days before the fall of civilization, but now the secret of their creation has been lost to science. Occasionally, though, one does turn up in a ruined city or old battlefield. The scope is a steel tube with two crystal lenses in it, one at either end. If affixed to an irradium rifle or pistol, the Scope can greatly enhance its deadliness. The crystals have a minor magnetic charge, and somehow enable the weapon it is affixed to to better "lock on" to its target, increasing both accuracy and damage potential. Unfortunately, the artifacts are delicate, suffering -2 to in situations where an item saving throw would be required. (d6: 1-3 +1, 4-5 +2, 6 +3)

Other WotRP Previews:
The Martian Underworld
Monsters of the Red Planet
WotRP Class - The Scoundrel
Weird Science!
WotRP Class - The Mentalist
Dar Taru's Emporium
John Carter and the Orcs of Mars
Posted by Al at 4:39 AM